Substance Use - Overdose Crisis in BC

Currently, unintentional illicit drug overdoses are the number one preventable cause of death in BC. Many people are referring to this crisis as a pandemic, as the consequences and loss of life are comparable or greater than that of COVID.

Some people in our communitites are being disporportionately impacted by this crisis. For example, in 2020 of the 1724 people who died in BC of an unintentional illicit drug overdose, 8 out of 10 were men. Also, the First Nations Health Authority has recently preported that drug-related deaths in First Nations people from 2019 to 2020 increased 119%, with First Nations people dying at 5.3 times the rate of other residents in BC. This is a devastating tragedy.

Fentanyl is a synthetic (human-made) narcotic (analgesic) drug that was developed for severe pain management. Fentanyl acts to suppress your central nervous system (CNS) and is termed a "depressant" type drug, meaning that it can severely depress your respiratory system (breathing rate). It is 50-100 times more potent than other opioid type drugs (i.e. morphine); therefore, the risk of overdose is significantly higher. In 2020, in 8 out of 10 overdose deaths, fentanyl toxicity was found to be a contributing factor.

You can’t see it, smell it or taste it.

Why am I hearing so much about fentanyl related deaths?

Since 2000, the number of fentanyl related deaths has significantly increased--especially in Canada’s four largest provinces. Ranging from doubling to an increase of over 20 times. For example, the Canadian Centre of Substance Abuse (August 2015) reports that fentanyl-detected deaths in BC (fentanyl was detected in the body, irrespective of cause) rose from 13 in 2012 to 90 in 2014 — a seven-fold increase. And while they note that better data collection needs to be done across the country, this agency reports that there were at least 1,019 fentanyl-detected deaths and 655 fentanyl-implicated deaths (fentanyl determined to be cause or contributing cause of death) in Canada between 2009 and 2014.

I use drugs occasionally but not fentanyl. Am I at risk?

Unfortunetley yes. Unless you are purchasing drugs from a person or place other than a licensed pharmacy or approved health facility you are at risk. In Canada it has been found in heroin, oxycodone, cocaine, crystal meth and other drugs in powder, liquid or pill form. The pill form is often sold as ‘oxy’ or other club drugs.

What are the symptoms of an overdose?

If you fear you or a friend is experiencing an overdose, they will exhibit some or all of the following symptoms:

What are some harm reduction strategies if using substances?

What is naloxone and how can I access a naloxone kit?

Naloxone is a medication that can temporarily reverse the effects of an overdose from opiate type drugs (fentanyl, morphine, heroin, methadone, etc.). BC has developed a ‘Take Home Naloxone’ (THN) program to help reduce overdose deaths and save lives.

The Wellness Centre os a THN Site, and can offer naloxone training in 15-20 minutes. If you come to the centre in OM  1479 anytime we are open one of the Student Wellness Ambassadors or the Wellness Coordinator can train you and provide you with a THN kit.

To learn more about these kits and where you can access them, please refer to the provincial Harm Reduction Program Toward the Heart.

Signs of an opioid overdose

What do I do if I suspect someone has had an overdose?

Know the risks.
Know your options.
Know that we're here to support you. 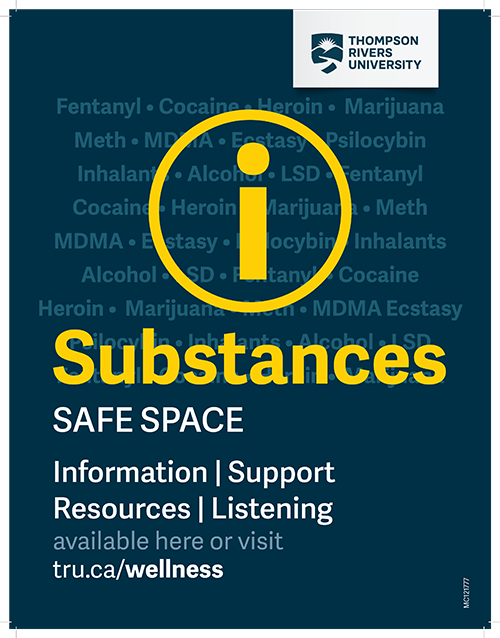 There are many ways you can reach out and ask for support if you need help. You can always start by talking to a friend or trusted family member. Also, as a TRU student you can talk confidentially to one of our Student Services professionals — such as a counsellor, Student Affairs Case Manager or Wellness Centre team member.

Phone: 1-877-207-8833
Website: LifeWorks
You can access free and confidential services through Ceridian, our campus Employee and Family Assistance Program, Lifeworks.