Reaching and grasping — motions so commonplace and intuitive that most people aren’t even aware of when or how often we perform them. 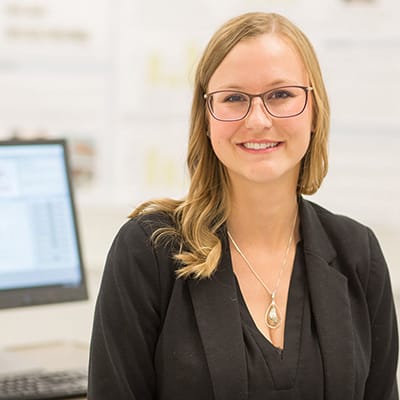 Eating, embracing, dressing, writing, driving, personal grooming, the list goes on: none of these things are possible without the ability to reach and grasp and the limitations on a life when these foundational functions fail to develop or are no longer possible are endless.

This has been the exceptionally focused research of Jenni Karl, assistant professor of psychology at Thompson Rivers University, since the onset of her academic career in neuroscientific research.

After growing up in a farming community of 500 people in rural Alberta, Karl became a first generation post-secondary student at the University of Lethbridge. While her original intention was to go into medicine, her path changed abruptly when Professor Ian Q. Whishaw took her on as a summer student; it was then that she discovered a passion for researching the complex wiring of the brain that allows or limits the abilities of the human body.

“What’s amazing about neuroscience research,” says Karl, “is that you can do more than you ever imagined to advance the knowledge and understanding of the brain’s functions as long as you’re following ethical protocols; which means you can also discover ways to improve lives.”

While working in Whishaw’s department, Karl helped conduct a study that trained lab rats to reach and grasp for objects, which led to the analysis of those same animals in order to discover how certain disorders affected their sensorimotor abilities.

“We would see if certain types of rehabilitative strategies could improve sensorimotor abilities after diseases caused debilitation. That work led to my honours thesis where we had a rat model of Huntington’s disease (which results in the death of specific brain cells deep inside the brain) and used stimulating electrodes to determine the integrity of the overlying motor cortex to control parts of the body. What I found was that the motor cortex actually remains fairly intact and healthy in a body with Huntington’s disease, suggesting that the disorder is really related strictly to the degeneration of those deeper brain structures and not to the breakdown of the body itself.”

Not only had Karl made an important advancement in understanding how Huntington’s disease impairs brain function, but her research also suggested that focusing on the intact motor cortex during the rehabilitation of a brain can have more impact than the traditional model of focusing on the brain cells that have already died. Karl knew that this new approach could have a significant influence when seeking to improve the lives of people suffering from such diseases.

In further pursuit of understanding the implications of her research, Karl continued to work with Whishaw and transitioned to human work while completing her PhD dissertation, Different Evolutionary Origins for the Reach and Grasp: an explanation for dual visual motor channels in parietal frontal cortex, which presented a cohesive theory explaining the phenomena of how the brain produces skilled reaching and grasping movements.

“I was interested in understanding human behaviour,” says Karl. “The focus of my PhD was to look at the skills and behaviour that we all perform every day that have a huge impact on our lives, but we tend to take for granted – the ability to reach and grasp for objects. Reaching and grasping for things is the foundation for how we use tools, groom and feed ourselves, write and communicate with other people, and it turns out that a massive portion of our brain is actually devoted to enabling these types of skilled hand movements.”

While traditionally the scientific world has believed the mechanisms of reaching and grasping were understood, based on her observations Karl was less convinced that the accepted thinking was correct.

Scientific thought has conventionally assumed that when our evolutionary ancestors transitioned to primates and became bipedal, we also evolved to have forward-facing eyes, which allowed us to see the actions of our hands. The visual system was then credited with developing the neural structures associated with the production of skilled hand movements; but Karl spotted a problem with that assumption.

“It was very apparent to us that there are many reach and grasp manipulatory hand movements that we make that are not under visual control, so I began asking: how do other sensory systems take over and control our hands when visual control is removed?”

“What our research with young infants is beginning to show is that it appears not to be vision, but actually touch, that is crucial for training the brain how to perform skilled hand movements,” says Karl. “We rely heavily on tactile feedback to learn to form skilled hand movements and shape our hands to pick up objects. As we age, the visual system actually has to learn to take over control of the hands, which is almost the exact opposite of the traditional model.”

The revolutionary concept that the human motor system seems to be trained up by touch and not by vision is now being substantiated by Karl’s current research at TRU. Karl was attracted to TRU for both the institution’s investment in researchers and its known motivation to support young researchers. By being empowered to further study reaching and grasping in early infant development, Karl is now able to investigate how different sensory modalities (vision, touch, proprioception, etc.) contribute to various perceptual and motor abilities. This research has considerable implications for both rehabilitation after injury or illness, and the possibility of improving lives through earlier intervention when a disorder is present.

“Skilled hand movement can be impaired after a stroke or brain lesion but is also affected in a large range of disorders – including things like autism, development coordination disorder, cerebral palsy, etc.,” explains Karl. “Often we can’t diagnose that kind of disorder until language begins to develop, but by examining reaching and grasping we can identify a disorder earlier which allows people to have an earlier diagnosis, which allows for earlier intervention and is known to improve the eventual outcome as well. I believe it’s only through understanding how these abilities first develop in young infants that we might be able to also restore them.”

Because of the significant mentorship Karl has received throughout her time in research, she feels strongly about the privilege and responsibility that the academic world has to teach the next generation of students. In addition to her own study of how neural systems in the brain develop the ability to produce skilled hand movements, Karl is also working with her students in the TRU Brain and Behaviour Lab to learn more about how visual processing is altered in the space around the hand – an area known as peri-hand space – and how this might contribute to the development of visually-guided reaching and grasping. What they are finding in the lab is fortifying Karl’s belief that reaching and grasping has traditionally been both underestimated and misunderstood.

“Rehabilitation is aimed at restoring lost abilities,” Karl continues. “I think if we can mirror how the brain learns during development in our rehab strategies it will be the most effective approach to restoring function. We need to teach the brain to re-learn the reach and grasp abilities the way it did, or was intended to, originally. If you believe the traditional model, you will teach someone to focus on using vision to guide their hand movements; whereas if you agree that these movements fall under tactile and somatosensory control then your rehabilitative strategy will be to train up these movements under tactile control.”

Karl’s research, supported by the Natural Sciences and Engineering Research Council of Canada (NSERC) and Alberta Innovates-Health Solutions (AI-HS), remains interested in trying to link developmental changes in perceptual and motor abilities to underlying changes in neural organization across different stages of development. While her major goal is to eventually have a comprehensive understanding of how our brains become wired to produce complex behaviours, Karl knows that the process of discovery will have major benefits as the research reveals intervention points that would allow a disorder trajectory of development to receive earlier intervention.

If given the opportunity to execute her dream project, Karl says that she would follow people from the day they’re born into adulthood to see how their experiences and interactions with objects in their environment correlates with their brain development. She would focus primarily on the dorsal stream; a largely unconscious system of the brain that takes in visual information and uses it to produce skilled hand movements to control actions and behaviours.

“How our brain changes during development to enable normal yet extremely flexible behaviour could be tracked and examined throughout all stages of life. We could use this information to discover what should be expected during typical developmental aging and what is atypical.”

Hypothetically, Karl’s project would allow for the identification of intricate neurological markers that could be placed on a normal human developmental timeline that would highlight key changes in behaviour and corresponding neurological activity. Those markers could allow experts to predict who might need earlier intervention as a trajectory pattern was mapped throughout a lifetime.

“Understanding how things normally progress is absolutely critical to understanding how things go wrong neurologically,” says Karl. “We can look at a disorder and see that something is different, but unless we understand what is typical then it’s impossible to know exactly what has gone off track or predict when it will. I believe there’s a misunderstanding that we already know everything about the development of healthy, typically-developing people; but we don’t, and that needs to be researched and explored in order to help all people live their best lives.”

Karl’s great hope for her work is that it will ultimately transfer into greater quality of life for people - that her research will have improved and restored individual lives that have been impacted by neurological abnormalities through a stronger foundation of knowledge.

“It’s so important that people are free to live up to their full potential. If we can help people to move better by alleviating their limitations and constraints then we can help people achieve the calling on their lives, and it’s amazing that my work can contribute to that.”