When we read literature, we’re often swept into the narrative of the lead characters and become observers of their behaviours; however, the psychological and biographical context of the writer is not normally as evident. Thankfully, this perspective and curiosity came naturally to Thompson Rivers University professor George Johnson, who charted his own undergraduate path in English and psychology at Western University. 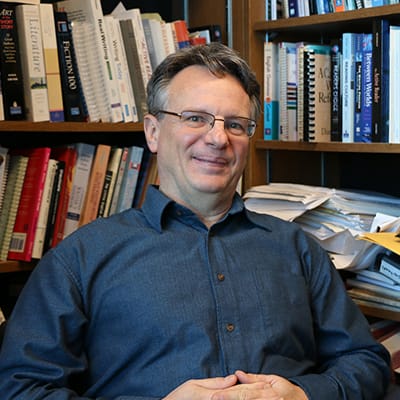 Johnson has been at TRU for almost 30 years and is the current chair of the English and Modern Languages Department. He teaches creative writing and literature and is also a scholar, screenwriter, playwright, and children’s author who was first inspired by his father - a high school English teacher.

“Then I had an innovative psychology professor during my undergrad who let me study the author Virginia Woolf from a psychological perspective,” explains Johnson. “She had a complicated and interesting psychological history, including abuse, sexual abuse and a bipolar condition.”

With this newfound passion for psychological examination of literature, Johnson went on to pursue a master’s degree at McMaster University, studying under Andrew Brink. Johnson’s thesis focused on the philosopher Bertrand Russell using original documents at McMaster.

“I took a psychobiographical approach focusing on (Russell’s) need for power as well as his love life. I stayed at McMaster and did my PhD on the influence of various early 20th century psychologies on the British novel, including the theories of Frederic Myers - a psychical researcher, Sigmund Freud, and Carl Jung,” says Johnson.

After teaching in Ontario for a year, Johnson moved to Kamloops in 1991, quickly becoming involved in social justice issues as the chair of the Global & Community Action Committee at Kamloops United Church. The group started performing skits on social justice issues exploring everything from the environment to sweatshop labour.

“That’s where I got started writing drama. I wrote shorter pieces which I’ve now turned into plays,” says Johnson. At the same time, a retirement at TRU created an opportunity for Johnson to take on some creative writing programming.

“Everything I’ve written, even my academic writing, has some sort of social justice dimension to it because I’m trying to give people a voice and trying to understand people who were ignored or criticised for their beliefs or sexuality or what have you. With my creative writing, I try to use humour because once you get an audience to laugh, you can go so much further in terms of what you say because they’re already laughing and they’re not going to turn against you.”

Johnson’s first published full-length play Still Life With Nudes was inspired by a local art show. The comedy tells the story of a group of seniors pulling out all the stops and antics in an effort to get their artist friend’s nudes of them posed with tastefully-positioned fruit displayed in a gallery. Promoting lost stories or the underdog is a common theme throughout all of Johnson’s work. Johnson won a national playwright award in Regina for Still Life With Nudes, where the play was also performed.

”I believe in the power of literature to create empathy, and all of my work reflects my long-time advocacy of social justice,” says Johnson, including his latest play Mockus, about a mysterious clown who provokes a Mayor into trying playful approaches to his city’s social and environmental ills. Chimera theatre staged it in Kamloops in 2017 and Jupiter Theatre just postponed their Calgary production because of the pandemic.

Early in his career Johnson mainly focused on academic writing but also wrote biographies of various writers as he edited three volumes of literary biography on British novelists from 1890-WWII. Working with scholars around the world, Johnson travelled extensively, researching lesser-known novelists -- people who had been neglected or marginalized by the literary world because of gender, sexuality, or socioeconomic status.

“I tried to bring back those writers, and a lot of scholarly work has been spawned by what we did on that project, so I’m really proud of that,” says Johnson. “One author I discovered that I really like is May Sinclair- there’s now a May Sinclair Society in recognition of her work.”

Part of Johnson’s interest in promoting women in literature and art is inspired by his mother, who was an Ontario-based watercolor painter.

“Mom faced resistance in getting recognition for her work because she was a middle-aged woman, especially as she aged,” reflects Johnson. “Women in this country have faced a lot of resistance to the acceptance of their art. My mom was involved in women’s art and the Art Gallery in Hamilton where they put on shows on the history of women's art.”

Johnson’s advocacy and passion for art in all forms stems from his strong belief in the important role of art as an integral part of a functioning society.

“The arts provide meaning and move us forward as a culture and nation,” asserts Johnson. “You have to respect the stories of your culture and sometimes you have to change the narrative to bring about a better future. The things we glorify or have glorified in the past, like war for example, those stories have to change.”

Johnson believes First World War poets changed the attitudes of culture towards war because those writers told of the horrors of war. His latest book, Mourning and Mysticism in First World War Literature: Grappling With Ghosts explores how some iconic British writers, such as Rudyard Kipling, J.M. Barrie, Arthur Conan Doyle, and Virginia Woolf express trauma or loss associated with the war.

“All of them had experienced trauma earlier in their lives, which made coping with war trauma more difficult than for their friends and family. They turned to some form of mysticism and wrote imaginative literature to basically heal the wounds,” says Johnson.

Johnson himself used artistic expression to work through the loss of his mother. He started writing children’s books after she passed away, the first being Hesperie and Her Butterfly Grandma.

“The story is about mom passing on her creative skills to her granddaughter. I’m hoping I can incorporate some of the watercolour paintings my mom did for children into the book,” reflects Johnson. “It’s called Butterfly Grandma because my mom loved butterflies and painted them a lot.”

Johnson hopes that the other children’s books he’s written, including the forthcoming Marisa and the Mountains, will promote kids’ interest in their natural environment.

“My goal was to help kids realize the things they have around them can’t be taken for granted,” says Johnson who is currently working on a series with Dixi Books in the U.K. which encourages young kids to get involved in their communities and participate in taking social action. The first one, How Hope Became An Activist will be released in the Fall.

“I decided to start focusing on connecting to kids about the environment in part because of how much resistance and inaction there is in terms of the environment. I thought if I could reach children and tell stories about change then I would do my part in creating larger overall change,” says Johnson. “If even a couple of kids read my children's stories and think they can do something to make a difference, then that would be very satisfying for me.”

Combining his interest in wartime experiences and children’s stories, Johnson’s most recent project, Ruptured Lives: Childhood During War Time, aims to capture some stories from seniors, including his father, who were children just before and during WWII in recognition of the war’s 75th anniversary. Johnson hopes to have the child of one of the interviewees write an afterword about the impact of having a parent who suffered loss during war, with the intention of highlighting the generational impact that war has on families and society.

The project is a continuation of the work he’s done around the First World War, which is captured in his screenplay Peace Pledge - inspired by the forgotten story of Aldous Huxley and the King’s Chaplain, an activist priest named Dick Sheppard. Sheppard led the opposition to war in the 1930s, forming the Peace Pledge Union, which resulted in thousands joining his call to action; the P.P.U. is still active in Britain today and enthusiastically supports Johnson’s project.

Researching content for screenplays like Peace Pledge and others, including Painter in the Storm — an unfiltered look at the life and death of painter Tom Thomson, is part of Johnson’s research requirement as TRU faculty. Johnson credits TRU for providing him the flexibility to pursue his passion for history expressed through art, creative writing, storytelling and social justice — a passion he shares with the current Dean of Arts.

“Being at TRU has allowed me to have both my creative writing and academic writing count and there aren’t too many other places where that could happen,” says Johnson. “At another university, I would have likely been more confined to purely academic writing.”

Johnson’s dream project would be to get one of his films produced, noting Peace Pledge would likely be the most universal story. Peace Pledge and a few other screenplays are currently being reviewed by independent producers, while Johnson also works with an agent in hopes of connecting with a producer like Netflix so that more Canadian content can be provided to the streaming media conglomerate.

“I’m optimistic Netflix might be interested in making a limited series of the Tom Thomson stories,” says Johnson, who collaborated with his friend Cameron Grant on this. “We’ve written the story as a feature film, but it could be segmented out into a series on Tom Thomson and the Group of Seven.”

“Thomson was a troublemaker. He was a single guy in his 30s and should have been in the First World War,” says Johnson. “Some of the other Group of Seven members did fight and were official war painters, but not Thomson. The official story was he had flat feet, but there’s no evidence or record of that being true. He was a rebel and I like that - he challenged just about everything.”

Johnson’s overall hope is that his own work will challenge and provoke people to think about their habitual ways of doing things and to imagine other possibilities.

“I don’t have the answers, but I ask the questions,” says Johnson. “I think that’s what art is about: raising the questions and making people aware of things they might be taking for granted.”