TRU’s English and Modern Languages Department has signed a student exchange agreement with the University of Chichester in southeastern England. The agreement allows TRU students to pay local rates for fees and accommodation while studying in England—and all credits accumulated at Chichester count toward your degree here!

When a high school friend went to Germany to study, Mariah Peters was sick with envy. And when she moved on to TRU, posters for Study Abroad seemed to beckon from everywhere.

“What really did it was an ambassador coming to my French class with dates and time for the info sessions – one happened to fall (mostly) in the break between my classes that day. I attended the first half before dashing off to class.”

From that point on, Maria was determined to go — she just wasn’t sure when or where. After making friends with international students who had attended Chichester University, she knew that was the place for her.

Arriving in England, Mariah was lucky to have friends already there to help her land on her feet. But her circle of friends soon expanded.

“The friends I made while I was there, welcomed me with open arms — they even threw a surprise 21st birthday party for me after I’d only been there two and a half weeks, complete with blindfold, balloons and a giant box of Britishness (including a garden gnome, jars of local rain water and Bogner Sea water, a welsh daffodil, and gingerbread men).”

She found herself immersed in endless new experiences.

“LOTR marathons and creepy pasta with homemade Pachos, nights at the pub, getting lost in the London underground during rush hours on my second day, going to Tescos at midnight before a 9 a.m. exam because they kicked us out of the campus library again, visiting Arundel Castle where my friend had worked for the few summers previous, the silent disco at the Winter Ball.”

Chichester gave Mariah a whole new perspective on the world, and has left her open to a lifetime of change. She highly recommends it to anyone in first or second year of university.

“Studying English brought me the opportunity to go to a little English town I’d hardly heard of, and make amazing friends and grow into a better person. I was inspired with a new sort of optimism about people and the world, that it was still a place full of wonder and kindness in spades.”

Mariah moved to Victoria to finish her bachelor’s degree and has her sights set a master’s degree. Somewhere abroad. 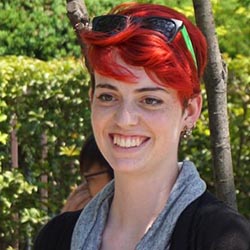