Sarah’s research focuses on migration and the laws governing work and social welfare, particularly the law’s interaction with social relations. She is the author of Enforcing Exclusion: Precarious Migrants and the Law in Canada (UBC Press, in press summer 2018), which documents the impact of migration status across multiple legal and institutional settings, including hospitals, schools, income security and employment standards. She has also published several chapters and articles dealing with temporary labour migration, and has received the Canadian Law and Society Article Prize (2013) as well as a SSHRC Joseph-Armand Bombardier CGS Doctoral Scholarship (2011-2013).

Sarah also has a background in clinical legal education, having held the position of supervising lawyer for a number of years with the Law Students’ Legal Advice program housed at the University of British Columbia. She is the co-author (with Sarah Buhler and Gemma Smyth) of Clinical Law: Practice, Theory, and Social Justice Advocacy, a new clinical education text for Canadian law schools, and has also published in the area of access to justice and lawyer competencies. In 2014, she was the sole author of a research study and report conducted to establish a foundation for the faculty’s first clinical law program. 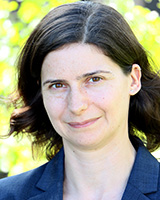