Close
> TRU Home > About Us > Our Mission > History 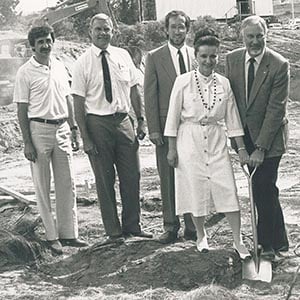 TRU’s history begins in 1970, when several new colleges were created by the provincial government to answer demand for academic and vocational programs in regions outside the urban centres served by the province’s three universities. Cariboo College welcomed its first 367 full-time and 200 part-time students from Kamloops and the region (then known as the Mainline-Cariboo) in September 1970 in the Kamloops Indian Residential School facility.

Cariboo College moved to our current campus on McGill Road in Kamloops in 1971, sharing the newly constructed Main building with the Kamloops Vocational School, and opened a satellite campus in Williams Lake to serve surrounding communities.

As part of a province-wide move to join vocational training schools with community colleges, Cariboo amalgamated with the Kamloops Vocational School in 1974. In 1978, the British Columbia Colleges and Provincial Institutes Act gave Cariboo corporate status with its own governing board, and also created the Open Learning Institute, which would become TRU Open Learning, to provide postsecondary programs via distance.

In our first twenty years, employees and students increased tenfold, and the campus grew to include over a dozen buildings, several of which were expanded. The Williams Lake campus moved to the Hodgeson Road facility in 1985. The City of Kamloops declared Nov. 16-22 as "College Week" in 1986, recognizing Cariboo's role in shaping Kamloops culturally, economically, socially, recreationally, and educationally. 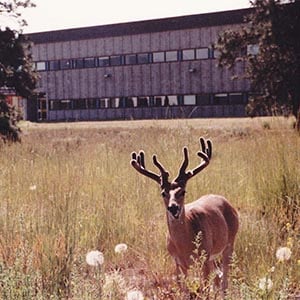 Caribou on the grounds with Old Main in the background

In 1989, we became a university college, offering baccalaureate degrees under the oversight of the province’s three universities. The first degrees were awarded in 1991, and our name changed to University College of the Cariboo (UCC). With the proclamation of the College and Institute Amendment Act in 1995, UCC was given independent degree granting authority. More construction followed throughout the ‘90s as a result, including the Campus Activity Centre.

The first UCC Bachelor of Arts degrees were awarded in 1998, followed by the Bachelor of Technology in Applied Computing Science and Bachelor of Tourism Management degrees in 1999. In 2002, UCC began to offer master’s degree programs in collaboration with UBC and SFU, and gained the authority to grant applied master's degrees autonomously in 2003.

We became the province’s newest university in March 2005. TRU was incorporated under the Thompson Rivers University Act, which amalgamated the University College of the Cariboo with the BC Open University and other aspects of the Open Learning Agency. UCC president Roger Barnsley continued at the helm of the new institution.

The province designated TRU as a special purpose university which would continue to offer undergraduate and master’s degrees, vocational training and adult basic education, undertake research and scholarly activities, and with the addition of Open Learning programs and courses, would provide an open learning educational credit bank for students. 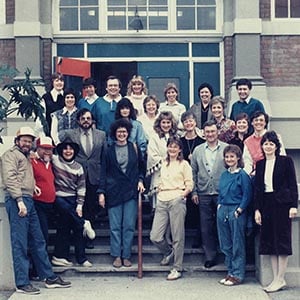 TRU continued to experience growth this decade, both in programs offered and in enrolment of online, distance, and international students. The TRU Master of Business Administration, Master of Education, and Master of Environmental Science saw their first graduates. TRU researchers and students received an increasing number of grants and scholarships from the Natural Sciences and Engineering Research Council (NSERC), the Social Sciences and Humanities Research Council (SSHRC), and the Canadian Institutes of Health Research (CIHR), as well as funding from provincial sources like the BC Forest Science Program. Research infrastructure was expanded with grants from Western Economic Diversification Canada, the Canada Foundation for Innovation (CFI), and the BC Knowledge Development Fund. Three Tier 2 Canada Research Chairs (CRC) were appointed at TRU, in Community and Ecosystem Ecology (Dr. Lauchlan Fraser), Cultural and Artistic Inquiry (Dr. Ashok Mathur), and E-Learning Practices (Dr. Norm Friesen), as well as a new BC Regional Innovation Chair in Cattle Industry Sustainability (Dr. John Church) through the province’s Leading Edge Endowment Fund (LEEF).

Construction on campus continued. BC Premier Gordon Campbell officially opened the 11-storey TRU Residence and Conference Centre building in November 2006, the result of an innovative private-public partnership to provide on-campus housing for 580 students. In 2007, TRU’s state-of-the-art new Williams Lake campus opened, merging six facilities under one roof. Also in 2007, all Open Learning operations relocated from Burnaby to TRU’s new BC Centre for Open Learning building on the Kamloops campus, bringing with it 15,000 distance and online learners. In 2008, construction began on the House of Learning, incorporating new library, learning commons, and Aboriginal program and service spaces.

The Master of Science in Environmental Science program launched in 2007. TRU’s commitment to sustainability received new direction in January 2008 with the appointment of a new Director of Environmental Sustainability, and a new Campus Sustainability Action Plan was developed a year later, focusing on the natural environment, built environment, and social/cultural environment. A $1.5 million energy retrofit was completed in 2011, and the savings put into green revolving funds as part of TRU’s membership in the Billion Dollar Green Challenge.

In September 2011 TRU welcomed the first students to its Faculty of Law, the first law school opened in Canada in over 30 years. In October TRU released its new Academic Plan, and joined the six-member Research Universities Council of British Columbia (RUCBC). 2011 also saw the opening of the new Brown Family House of Learning building, providing new learning environments for students, faculty, and staff. Plans were unveiled for the revitalization of the cornerstone of TRU’s campus buildings, Old Main, with 40,000 square feet of new learning space and an innovative design which echoes the Kamloops landscape, inspired by Group of Seven painter A. Y. Jackson’s depiction of Mount Paul. Renovations began in 2012.

2013 began with the 20th anniversary of International Days, TRU’s award-winning forum for intercultural and international education. The new Centre for Student Engagement and Learning Innovation, established with the 2011 Academic Plan, officially launched with the opening of new offices in Student Street. Public consultation began on the proposed university village development (now known as The Reach) of the 250-acre Kamloops campus. A new LEEF BC Regional Innovation Chair in Aboriginal Early Childhood Development (Dr. Rod McCormick) was appointed in July. In August, TRU launched the first phase of its new website.