School of Trades and Technology

Surface water is water that has accumulated on the surface of the ground.

In many parts of Canada, surface water starts as snow or rainfall in the mountains. The rain or snowmelt runs down into creeks and streams. These in turn drain into rivers, lakes, and sometimes into man-made reservoirs on the ground’s surface. Surface water.

In some areas, surface water moves down into the ground, and then it is called, logically enough, ground water. You can find out more about that under the ground water topic. 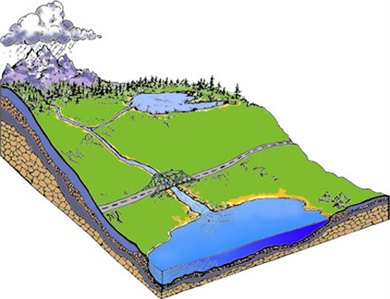 The Sources of Surface Water

If you live in an area with lots of mountains and bedrock, you probably get your water from a surface source. This has been the traditional source of water in Canada since humans first arrived.

However, these advantages lead to pressure on the water supply. When land is developed, runoff is affected. There is competition about who receives the water and confusion about who is responsible for keeping it clean.

In some areas, governments require water licences or permits, which are meant to ensure that no one takes more than their share of water and that they return the water without major pollutants. Those around you must respect your right to clean water; developers must restrict or monitor their activities to ensure they do not affect it.

In short, surface water can be safe and reliable, but it is also susceptible to natural and human impact, since it is exposed and often unprotected.

A commmon example of a natural hazard is aquatic life and its by-products. Surface water can pick up nutrients like nitrogen and phosphorus from agricultural runoff. Add sunlight and you have the ideal environment for aquatic plants and animals to grow.

Wildlife, farm animals, and pets need water and drink it directly from the source. If an animal is sick or has parasites, it is likely that it will contaminate the water as it drinks. Other animals may, in turn, drink the contaminated water and become infected.

The harmful organisms or pathogens left behind in the water can be in the form of bacteria, viruses, or protozoa such as Giardia and Cryptosporidium.

As water is used for recreation, there is a possibility for contamination by:

Another hazard is runoff from heavy rain which contains hazardous chemicals from:

Almost everything that goes into a storm drain will end up in a stream or lake. Most household or industrial chemicals are not removed by typical municipal treatment. 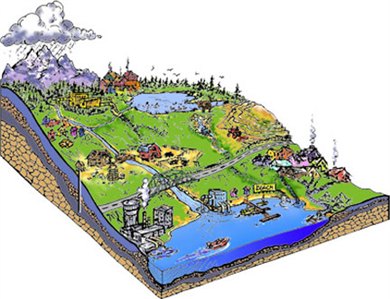 As surface water runs across the surface of the ground and is open to the atmosphere, it can pick up contaminants easily. Surface water should not be used without boiling or treatment.

Campers, hikers, or hunters who drink from a freshwater stream assuming that it is pristine, can get severe stomach cramps and persistent diarrhea that may last for weeks if untreated.

Contaminants can come from human activities such as camping or boating, which can leave gasoline and oil in surface water. Or contaminants can occur naturally as microorganisms, which are harmful to our health.

Surface water can contain many types of biological hazards, and it’s expensive to test for each type. Common tests are for coliforms or E. coli bacteria. The tests are simple, relatively inexpensive, and, if these indicator bacteria are detected, it’s a sign that other hazards may be present. 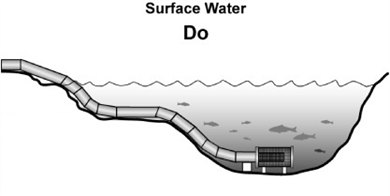 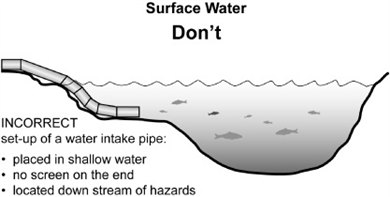