The diploma nursing program was introduced to Thompson Rivers University (TRU), then called Cariboo College, in 1973. Previously, from 1904 until that time, nursing education in Kamloops had been provided by Royal Inland Hospital (RIH) School of Nursing. The closure of the hospital schools of nursing and the move to establish the nursing program in an educational institution was consistent with the national direction for nursing education.

The first class of 54 students entered the program in the fall of 1973. The staff consisted of four faculty and a chairperson. The program was a two-year program, with students attending for 11 months of the year. There were many challenges in the first few years including developing curriculum and adjusting to the new context. The Registered Nurses Association of BC (RNABC) now called Associationof Registered Nurses of BC (ARNBC) had initiated a new process for approval of schools of nursing. Gaining RNABC 'approval' also presented major challenges during that time.

Beginning in 1980,the Nursing Department started to expand beyond the basic diploma program to develop and implement other programs. These programs included the RN Refresher Program, an OR Specialty Program and the Long-Term Care Aid Program. In 1980, the Department began working towards having a degree program in Kamloops. In 1980, there was a proposal submitted to The University of British Columbia (UBC) to consider Kamloops as the site for an 'external degree program'. In the late eighties, programs continued to expand including the development of a RPN/RN Access Program, a Native Health Careers Access Program and Continuing Education courses e.g. a pharmacology course and a course for RN Prep. Also, during this time, the Board of Directors of the hospital in Williams Lake expressed their concern about the shortage of nurses in that area. In 1989, Cariboo College began to offer an LPN/RN Access Program in Williams Lake.

In 1989, Cariboo College was granted University-College status and became University College of the Cariboo (UCC).  This was the first year that the Post-RN-BSN Program from University of Victoria was offered in Kamloops. At the same time, work began, in collaboration with other partners, to develop a generic baccalaureate program. This group was called the Collaborative Nursing Program (CNP) in BC. The generic degree program was successfully launched in 1992. At convocation in 1998, UCC granted its own degrees for the first time. Forty-three graduates received their Bachelor of Science in Nursing Degree from UCC.

In the mid-nineties, there was a shift in the demand for registered nurses. With the downsizing and re-structuring of the health care system, graduates were now finding it difficult to obtain full-time employment. Many graduates had to work on a casual basis with more than one employer. Nursing schools were threatened with a decreased number of seats, decreased enrolments and fewer applicants for the remaining seats. This trend impacted the UCC program as well. The number of available seats was reduced to approximately 50, from the maximum of 75, a few years earlier. The first two years of the program that was being offered in Williams Lake was cancelled in 1996.

In the late nineties, the national nursing organizations began to be successful in getting the message to the public and the politicians that there was a crisis looming in relation to a shortage of nurses. Agencies began to experience an inability to fill the nursing positions. Suddenly the trend was reversed and governments began to fund more seats in nursing schools. As a result, TRU School of Nursing now has 82 seats available for BScN students each year. As well, the Williams Lake program was re-instated, taking in approximately 20 students every second year. These students complete the first two years of the program and then join the program in Kamloops for the final two years.

The TRU School of Nursing has continued to experience growth and positive changes. The staff has increased from four faculty members in 1973, to approximately 60 full and part-time faculty. There have been a number of new programs and exciting initiatives including the development of a Primary Care Clinical Nursing program, a Mental Health Specialty program, and a CIDA funded international project in Nepal. The program, with all the partners in the Collaborative Nursing Program in BC, received the maximum seven-year approval from CAUSN, the national accrediting body for schools of nursing in Canada, in 2000.  The following year, the high quality of the curriculum was recognized when the CNP was granted the Program Excellence Award by ACCC (Association of Canadian Community Colleges). The most recent initiative was announced in May, 2003. TRU will be collaborating with UBC to bring UBC's Masters of Science in Nursing to a cohort of students living in and around the Kamloops area. This program began in the fall of 2003.

Some grads return to join faculty

The School of Nursing at TRU is 45 years old now in 2018. Throughout these years, there were many challenges and opportunities for the program. The faculty has a lot of pride in the high quality of the graduates from the program and has worked diligently to maintain that quality. The future will continue to offer challenges. One of these challenges will be the recruitment and retention of qualified faculty. A recent occurrence is that some of the graduates of the program have returned to be appointed as faculty members. We believe that this is very positive and that some of the faculty, along with others, will continue to work diligently to maintain the established base and tradition while seizing opportunities for new and exciting initiatives in the future, so that TRU will continue to be a leader in nursing education.

On March 31, 2004, UCC's full provincial university status was announced. On September 22, 2004 BC's newest university was named Thompson Rivers University. From 2003 to 2010, TRU collaborated with UBC to offer the UBC Masters in Nursing program. In 2008 the Licensed Practical nursing Program begun at the TRU Williams Lake Campus and the return to Registered Nurse Practice Program begun being offered by TRU, Open Learning. In 2010 TRU added an Aboriginal Pathways to Health Careers Certificate program and the Health Care Assistant program grew from the Home Support Resident Care program. Today is an exciting day for TRU school of Nursing and the University continues to evolve. 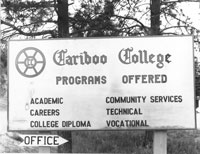