TRU Law is home to the Canadian Journal of Comparative and Contemporary Law (CJCCL). The CJCCL is published under the direction of the Faculty Editors-in-Chief, Professors Robert Diab and Chris Hunt and Professor Lorne Neudorf of the University of Adelaide.

Launched in 2015, the Journal aims to fill a gap in the landscape of Canadian legal scholarship by featuring research with a comparative focus, on issues of pressing interest to jurists in Canada and other common law jurisdictions.

The CJCCL has published a range of prominent scholars and jurists on Health Law and Human Rights (2015); the Law of Equity (2016); Problems of Interpretation in International Law (2017); Privacy, Identity, and Control of Data (2018); Beyond Humanity: New Frontiers in Animal Law (2019); Issues in Charity Law (2020); and Democratic Decay: Challenges for Constitutionalism and the Rule of Law (2021).

The Journal has featured prefatory essays from Justices Louis Le Bel, Russell Brown, and Rosalie Silberman Abella of the Supreme Court of Canada along with Lorne Sossin and Senator Murray Sinclair.

Research published in the CJCCL has been cited in leading journals around the world, including the Cambridge Law Journal, the Oxford Journal of Legal Studies, Public Law, Griffith Law Review, Auckland University Law Review, and many others.

The CJCCL is an open access journal, with articles freely available at the CJCCL website, and can also be found on Canlii.org, HeinOnline, Westlaw, and Google scholar. 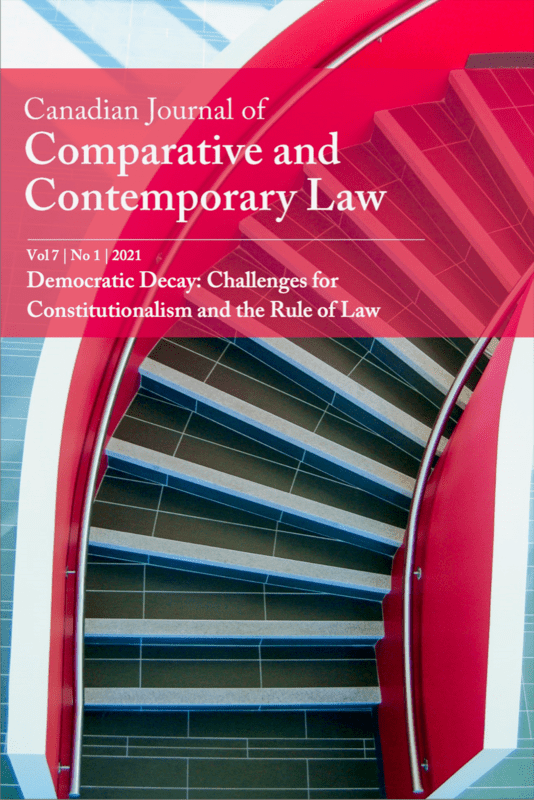 Cover of the seventh volume of the Canadian Journal of Comparative and Contemporary Law, titled "Democratic Decay: Challenges for Constitutionalism and the Rule of Law".