Coach goes the distance in an educational marathon 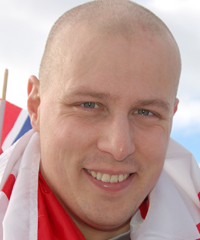 I believe this sets a good example for my children, in that no matter what the circumstances are, if you really want to do something there is always a way to make it happen.

For Lee Davidson, earning his university degree hasn't been like running the 40-yard dash. Instead, his journey to the end zone has been a 15-year process, involving a health crisis, a continental move, fatherhood and a host of other life changes.

Today, Davidson lives in Oslo, Norway, where he holds a full-time coaching position, raises his two children and studies through Open Learning. While you might think he has enough to keep him busy, he plans to complete a Bachelor of Arts in Psychology, focusing on sports psychology.

"I have finally decided to finish my degree because I'm interested to blend my interest for psychology with my experiences in sport," he explains. "I was looking for distance education, because the flexibility was the biggest draw, and Thompson Rivers University was a natural choice."

It was a natural choice because Davidson had once been an on-campus student at the university in 1996, when it was still called Cariboo College. Then, he was a young athlete and student just beginning his university studies. Like many others, Davidson wasn't sure what he wanted out of his college experience. He did know that he wanted to play football. So he dabbled in a few Arts courses and joined the junior football team in Kelowna, spending half his time there and the other half in his hometown of Kamloops.

But he was forced to put both his football career and his academic pursuits on hold when he was diagnosed with cancer. For two years, he underwent treatment. When he was declared cancer-free, he had to reassess his goals. His interests still lay with sport, but this time around, on the coaching side. He also hankered to live abroad. He did some research in Europe, where most people think football is a sport played with the feet, not the hands, and knew the growing fan base for American Football offered tremendous opportunity to those who could bring their experience to a new market.

"So it was coaching that brought me to Norway, and now I actually coach hockey," he says.

That was 11 years ago. Since then, he has learned to speak Norwegian ("The hardest part is that everyone speaks English, so it's easy to get lazy," he says), raised a family (he has a daughter, eight, and a son, seven) and finally resumed pursing the university degree he started many years ago.

He acknowledges the difficulty in coordinating all his obligations. He is no longer married, and while he shares parenting responsibilities with his ex-wife, it means he often juggles the role of single father alongside his job and coursework. However, unlike the young student he was 15 years ago, today he knows what he wants and where he wants to go.

"I believe this sets a good example for my children, in that no matter what the circumstances are, if you really want to do something there is always a way to make it happen if you are willing to work hard and see your goals through to completion," he says. "I need 10 courses to finish my degree. If that takes two or three years, that's OK. The important thing is to jump in and get started."