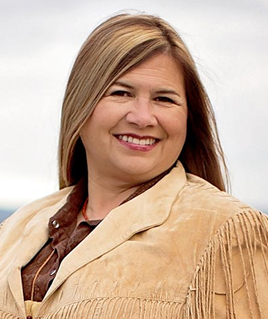 I have been fully immersed within my Shuswap culture since birth and was lovingly raised by my elders to protect the people and the land. I believe this new academic achievement has provided me with more tools to strengthen, and to merge with, my traditional teachings.

Kristy Alphonse Palmantier is all too familiar with the need to be flexible with life's plans, because when we least expect it, something comes up and we're left re-writing our plans, putting them on hold or even scrapping them all together.

After completing an Agriculture Diploma from Olds College in Alberta in the early 1980s, she was all set to take more classes, earn a degree and see where life would take her.

"Then life happened and my family started," she says of school being pushed near the bottom of her priorities list, where it would remain until she had the time to properly dedicate to the rigours of classes, academic reading, papers and other assignments. As it turned out, many years went by and she filled her time with marriage, four children, a home, a greater involvement with her T'exelc community (Williams Lake Band) and working with the British Columbia government. School slipped further down the list, way down, but not off it.

As she waited, Alphonse Palmantier delved into areas that interested her and ones she had a knack for. She acquiried valuable leadership and planning skills in critical roles with T'exelc, where she served as Education Coordinator, Treaty Coordinator, Project Coordinator, as Natural Resources Director and spent two terms on Chief and Council. With the BC government she started with the Ministry of Forests in the early '90s, where she dealt with small business, major licensees, silviculture and range. In 2006 she was seconded to the Ministry of Environment and since that ministry merged a few years ago with the Ministry of Forests, Lands & Natural Resource Operations, she has ensured positive Aboriginal engagement, consultation and open communication with stakeholders. In her role, Alphonse Palmantier creates an ongoing forum for First Nations voices in the areas of wildlife management and conservation.

As she moved along in life and strengthened her skills and experience, she finally paid off her mortgage and her grown children began making their own plans. The time she had patiently been waiting for had arrived and school found itself at the top of her list. She took courses online through Open Learning and on the TRU campus in Williams Lake.

"Returning to school for my degree had been a life-long wish and bucket list item for me. After three decades away from the academic world, I knew it wouldn't be an easy journey, but with the help of close friends and family, plus diligence and hard work on my part, I was able to achieve what I set out to do," she said.

In Spring 2017 Alphonse Palmantier completed a Certificate of Indigenous Studies at TRU Williams Lake and through TRU-OL, a Bachelor of General Studies with honours. As further validation of her efforts, she gave the Valedictory address for Williams Lake Commencement where her impassioned speech touched on overcoming obstacles, the value of education, reconciliation with Canada's Aboriginal people and the role Aboriginal people will play in Canada's history going forward.

"I have been fully immersed within my Shuswap culture since birth and was lovingly raised by my elders to protect the people and the land. I believe this new academic achievement has provided me with more tools to strengthen, and to merge with, my traditional teachings. I am very proud of my accomplishments, and I hope to be a role model for anyone contemplating going back to school to finish off their educational dreams."