When I first received word that I had been awarded the Joseph-Armand Bombardier Canada Graduate Scholarship, I could not contain my excitement. My mother had plopped down that fateful letter from the Social Sciences and Humanities Research Council of Canada on my desk and awaited my reaction as I opened it.

When I clenched my fist and gnashed out a “yes!” through grinning teeth, she knew it was good news. It was probably the only time I have ever been proud of making my mother cry.

This generous funding from SSHRC allowed me to move to the west coast to pursue my Master’s Degree in English Literature at Simon Fraser University. I intend to complete the coursework program and produce an extended essay concerning the Irish poet W.B. Yeats, particularly his work A Vision, which is a complex and nigh-impenetrable esoteric belief system that was compiled while his wife spoke and wrote to him while she was in a trance-state. This belief system informed some of his greatest works, including his famous poem “The Second Coming”. I had always been interested in mysticism, the occult, and the paranormal. “The Second Coming” and the body of work behind it immediately resonated with me. I am excited by the prospect of studying A Vision in depth because many scholars tend to shy away from Yeats’s occultism due to its bizarre nature. As someone who has always embraced the bizarre, I think I might have something to contribute in this regard!

Thompson Rivers University has provided me with a wonderful array of instructors who exposed me to a broad range of practical and theoretical knowledge in my pursuit of a Bachelor of Arts degree in English Literature. While the TRU faculty is universally knowledgeable and inspirational, two professors stand out as mentors in my eyes. Professor Daniel Dorogi of the Department of Sociology and Anthropology supervised my substantial research project (U-REAP) on the socializing effects of music (specifically, heavy metal and rap), which gave me tremendous insight into the research and composition standards required for success in a graduate studies program. In addition, it was he who convinced me to “go all the way” in the first place, and to take my studies to the next level. Professor George Johnson was another excellent mentor, as he helped me refine my creative writing skills and also provided me with a letter of reference which helped culminate in my acceptance at SFU. His knowledge of dynamic psychology and psychical phenomena in British literature—as taught in his Early Modern British Literature course—opened me up to a literary period that I had initially overlooked, but now look toward with increased vigor and an insatiable thirst for more.

Finally, here are a few tidbits of my unsolicited advice to undergraduate students: do not overlook the untapped opportunities that lie right in front of you in Kamloops! If you are passionate about the academic lifestyle, be confident in your abilities. Apply for everything you can possibly apply for, and do not be afraid to get to know the TRU faculty. TRU is a growing institution, and students like you are instrumental in furthering its growth. I am proud to have been a part of it.

Thompson Rivers University has provided me with a wonderful array of instructors who exposed me to a broad range of practical and theoretical knowledge in my pursuit of a Bachelor of Arts degree in English Literature. Nick Beauchesne

Cary Morin talks about TRU’s RPW program as an English major in the Rhetoric and Professional Writing program (RPW), my experience at TRU helped me tremendously.

At first, I never believed a simple degree would take me so far. However, combining my experience at TRU (through their outstanding job preparation seminars and their challenging courses) allowed me a quicker transition into a career.

Moreover, it helped me in my current capacity as Public Relations and Communications Coordinator in the BC treaty process, where I work for my community (the Northern Secwepemc te Qelmúcw).

I even found, upon entering my current position, that the highly theoretical courses can actually be more useful when applied in the real world as opposed to the classroom setting. As a result, I feel confident in helping my community by having developed good listening, reading and writing skills, which are, in the end, irreplaceable in modern boardrooms. My experience in the Rhetoric and Professional Writing program shows, without a doubt, that it is a highly applicable program in today's workforce, especially as we enter a new age of “easy information” and as the questions get more difficult and difficult for our coming generations.

My experience in the Rhetoric and Professional Writing program shows, without a doubt, that it is a highly applicable program in today's workforce . . . Carly Morin

My name is Kyle Card and I am a third-year student at TRU. In 2006, I studied Japanese abroad at Obirin University in Japan through the TRU Study Abroad program. My interest in the Japanese culture probably started back in high school when I became very good friends with some Japanese exchange students. However, my actual study of the Japanese language started about two and a half years ago at TRU.

At TRU I not only acquired a base knowledge of perhaps one of the world's most unique languages, but also insight into a fascinating and appealing culture quite different from my own. I am currently applying this knowledge as I continue my study of Japanese at Obirin University in Japan. Having taken first- and second-year courses in the Japanese language at TRU before my departure, I left for Japan somewhat culturally and linguistically proficient, ready to take on a country completely alien to me. I am currently having no problem adapting to the pace and way of life here, and I attribute a great deal of this to my studies at TRU and the friends and contacts I have made as a result of these studies.

Japan is an amazing country, I have seen things and met people I never would have had I not studied Japanese. Because of this, Japanese has become a sort of cherished thing to me, and as such I would recommend anyone to learn Japanese. Japanese continues to benefit me now as much as when I first started learning it, and I have no doubt it will continue to benefit and help me in the future. If anything I can go to the sushi-bar and avoid any mix-ups resulting in my eternal rest with whatever deadly aquatic organism I ingested!

I cannot say I have ever had a dull moment while studying Japanese at TRU or abroad, there is just something different about Japanese from other languages. Amusing at times, down right ridiculous at others, Japanese is quite possibly one of the most enjoyable languages to learn. So I say to anyone who has an interest in learning Japanese to start as soon as you can, and explore the world it will open up to you. Ganbare!

At TRU I not only acquired a base knowledge of perhaps one of the world's most unique languages, but also insight into a fascinating and appealing culture quite different from my own. Kyle Card

In September 2002, I registered in a Beginners French Course at TRU, which was known as The University College of the Cariboo at that time. Learning a new language takes time, patience and a lot of practice. However, I had very passionate and enthusiastic professors who were always willing to help me. After 4 semesters of courses, including the Language Labs, I was motivated to take French Immersion at L’Université du Québec à Chicoutimi. One year later, I am doing my Bachelors in French Literature at the same University.

I am very grateful especially to Tiiu Harkies and Kelly-Anne Maddox, who were both my professors for some time. Now, I realize even more, how important it is to have a good foundation in your studies. The French Language Department does have quite a lot to offer despite being in a very non-French-speaking environment. The rest depends on your interest! 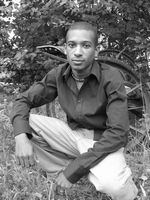 The professors really are great and helped me out a lot both inside and outside of the classroom; I found them very encouraging and always prepared to answer questions. An example of this is when I was taking a correspondence French course – I couldn’t possibly count the number of times that I went running into Annette Dominik’s office with questions, which she was more than happy to answer!

What I like most about the professors here is the fact that they are incredibly passionate about the languages that they teach; and believe me, their passion rubs off! Also, because each of them has spent time in a place where the language they teach is spoken, they also transmit to their students elements of the culture behind that language, which can really bring one’s studies to life! Currently, I am in Quebec teaching English, improving my French… and I am very grateful that I had some exposure to both the culture, and language before coming, from the professors at TRU.

I have been studying French for about 14 years, and will continue my studies as I have always wanted to be bilingual, and in the last few years, have decided that I would like to teach in either a French Immersion or Francophone school.

I would like to thank each of the professors in the Language Department for their influence in my studies, as I am now continuing on in my language studies and am now starting to learn Spanish (in French!), and would like to continue to learn other languages – your passion for your languages and the cultures behind them have started to develop in me.

What I like most about the professors here is the fact that they are incredibly passionate about the languages that they teach; and believe me, their passion rubs off! Kirsten Millard