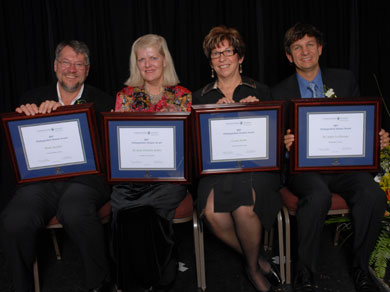 On Saturday October 20, four alumni were honoured at the Thompson Rivers University Distinguished Alumni Awards. Dr. Jette Elsebeth Ashlee, an anthropologist; Coryn (Cogi) Smith, a social worker; Mark Zuehlke, a military historian; and Dr. Andre LeDressay, an economist were all recognized for their outstanding achievements in their careers. Over 120 guests enjoyed a wonderful evening, including a three course dinner, awards presentations with videos of each award recipient and a spectacular dessert buffet. The door prize, a two night stay at the Delta Sun Peaks hotel was won by Ian McSpadyen.

Jette is an anthropologist and author that has worked extensively researching northern indigenous people. She prepared "Four Generations of an Artic Family set in Four Historical Periods" for the Royal Commission on Aboriginal Peoples and has had numerous articles published in academic journals. Her book, "An Artic Epic: The Story of How an Idea Influenced a Family" is about to be published. She brings her wealth of writing and research experience to "Explorations in Life Writing," the course she designed and teaches at TRU Williams Lake. Watch video.

Coryn is a social worker who works tirelessly to support people struggling with addictions in Kamloops, Meritt and Clearwater. Cogi, as she is known to her friends and family, is an active advocate for the improvement of life and well-being of families, community and society at large, and is described as a true role model and mentor to others. Watch video.

Mark is a former community news reporter that was inspired by a Rembrance Day interview with a WWI veteran to change careers. Zuehlke is considered to be one of Canada's pre-eminent writers of military history. On May 1 this year, he was recognized by the Canadian Authors' Association with the Lela Common Award for Canadian History for 2007 for his excellence in writing, "For Honours's Sake; The War of 1912 and Brokering of an Uneasy Peace". Watch video.

Andre, from TRU's Department of Economics is being recognized as this year's Honourary Alumnus. The founder and director of the local firm, Fiscal Realities Inc., LeDressay and his company have established an annual award to TRU's top economic student and regularly hires alumni to work as research economists to help First Nation's peoples realize self-governance through tax systems, investments and finance. He has assisted with the development of the federal legislation creating the First Nations Statistical Group, creating a land title system, and provides valuable information about First Nation labour statistics. Watch video.