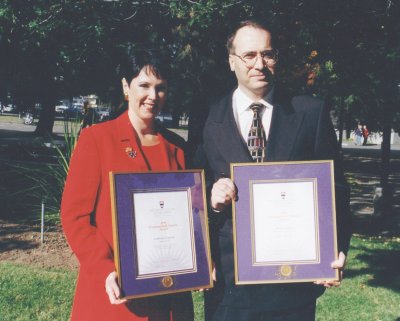 Cathy changed the public image of the BC Nurses Union in this province during her tenure as President as she frequently appeared in the media to clearly explain the value of nurses' work and the need to reinvest in provincial health care. During her term, her name became synonymous with nursing and with health care issues that are affecting all provinces in Canada. Cathy's philosophy is leadership by consensus and that nurses can be, and are, leaders in the health care system.

Everyone who speaks of Ralph's coaching abilities says he is a "players coach and technically he is superb." Ralph's exceptional volunteer service to UCC and its athletic program, and to athletics in Kamloops over the past 26 years have been recognized in the past by the Kamloops Sports Council when he won the Coach of the Year, and his national championship men's team won Team of the Year last year.

Michael came to Cariboo College after high school to study Computer Systems Operation Management. After graduating in 1985, he worked for BC Lotteries for a year, then moved to the States and worked for GTECH Corporation, the world's largest supplier of online lotteries. After moving back to BC, Michael started Riptide Technologies, a company that develops software for on-line lotteries, such as 6/49, and on-line business systems software. Last year Riptide won the BC Technology Industry Association's New Venture of the Year award, and won Enterprise Magazine's Business of the Year Award for companies with over 51 employees.